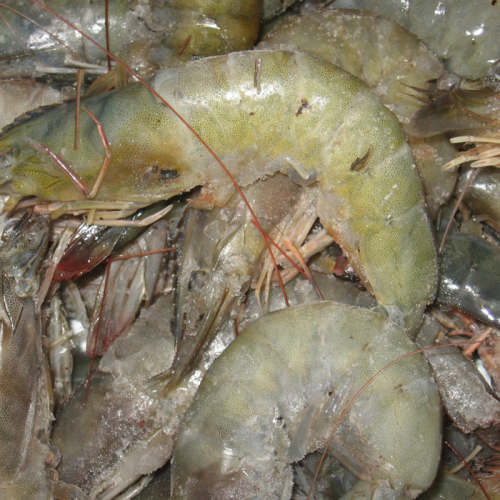 Effect of Freeze-Thaw Cycles on Quality of Pacific White Shrimp

Results of this study showed that repeated freeze-thaw cycles accelerate the changes of protein, microstructure, water distribution and quality deterioration in Pacific white shrimp, especially after three cycles, with a threshold of six cycles. 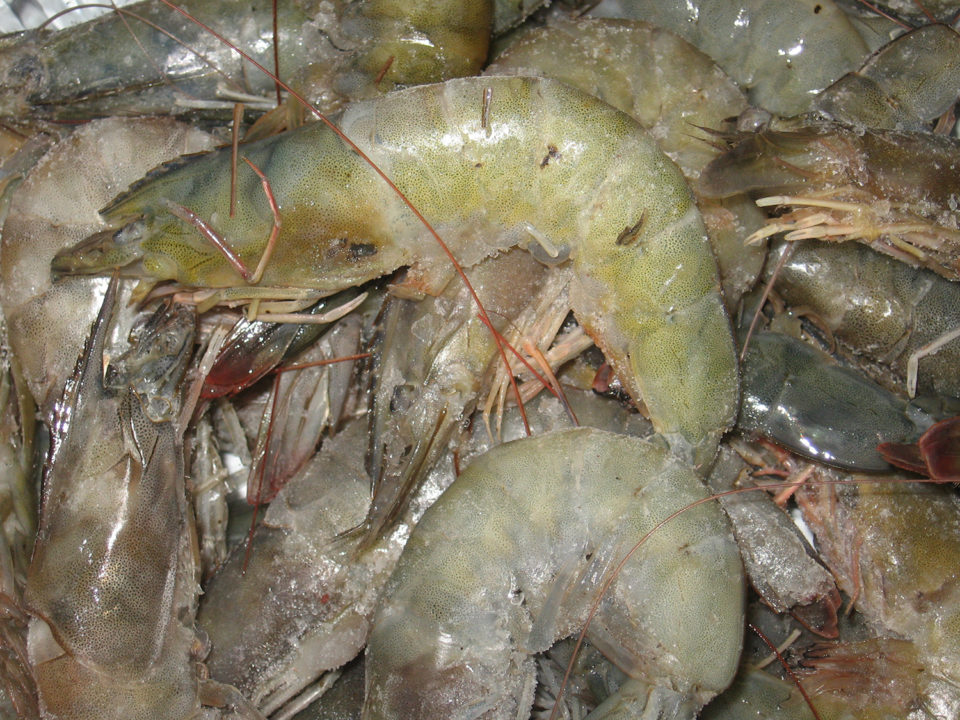 Shrimp is easily spoiled by protein degradation and bacterial and other activities and its shelf-life is also limited by melanosis (unpleasant, harmless black spots on the bodies of harvested, raw shrimp due to a naturally occurring enzyme) or red stain due to the appearance of black or red spots during frozen storage, a common method for the preservation of aquatic products.

Thawing is necessary for frozen food in order to facilitate the subsequent food processing and, it is inevitable that temperature changes or repeated freezing-thawing (F-T) cycles will occur in retail stores, restaurants or households. Unsold shrimp are usually frozen by retailers and then sold as iced shrimp, which can also involve repeated F-T cycles and this largely influences the integral structure and physicochemical quality of the shrimp.

Protein oxidation and denaturation are probably accelerated by lipid oxidation caused by F-T cycles and may decrease the edible quality through poor taste and discoloration. F-T cycles can destroy the texture of meat and transfer or redistribute its moisture, which decreases the water capacity and the sensory quality of the meat. As water is the main component of meat products, especially in aquatic products, the quality and stability of the aquatic product will be influenced by the physical state of water to a large extent.

This article – adapted and summarized from the original (Lan et al. 2019. Effect of the number of freeze-thaw cycles number on the quality of Pacific white shrimp: An emphasis on moisture migration and microstructure by LF-NMR and SEM. Aquaculture and Fisheries) – presents the results of a study with Pacific white shrimp (Litopenaeus vannamei) to investigate the maximum number of F-T cycles during storage by physicochemical indexes, and determine the relationship between the changes of water migration, muscle microstructure, protein degradation and quality in shrimp influenced by the number of F-T cycles.

Samples of fresh Pacific white shrimp weighing 1.6  kg (average weight of 12.0 ± 1.0  grams) were obtained from a local market in Pudong (Shanghai, China) and euthanized with ice water in the laboratory within 30 minutes.  Subsequently, to simulate the temperature fluctuations or repeated freeze-thaw cycles during commercial sale process and circulation, they were stored at minus-20  degrees-C for 12 hours and then thawed with crushed ice at 4  degrees-C for 12  hours. This sequence represented one  F-T cycle and the thawed shrimp samples were subjected to a total of eight  F-T cycles, and then analyzed by various techniques.

Results showed that, as the F-T cycles progressed, immobilized water shifted to free water and the content of water in muscle tissue decreased. During repeated F-T cycles, the different size, and location of ice crystals formed during each freeze-thaw cycle damaged the protein network and the reduction of water content was closely related to the damage of cell membranes and myofibrillar (muscle) protein caused by the repeated formation of ice crystals, especially after three cycles.

The damaged myofibrillar network made immobilized water difficult to retain. Repeated F-T cycles could also cause the water to be continuously transferred from intracellular to extracellular regions and increase the content of free water and drip (gravimetric) loss. The brightness of the pseudo-color diagram (Fig. 1) decreased from high to low with the increase of F-T cycles. The changes were most evident after four  F-T cycles, indicating that the water loss and quality deterioration became more serious. 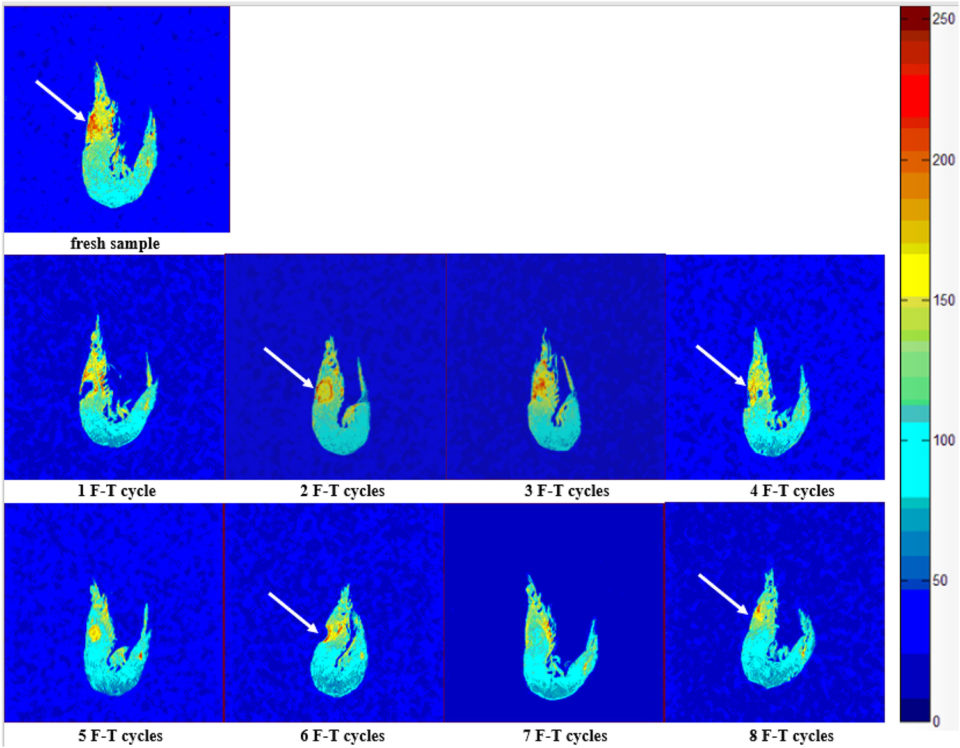 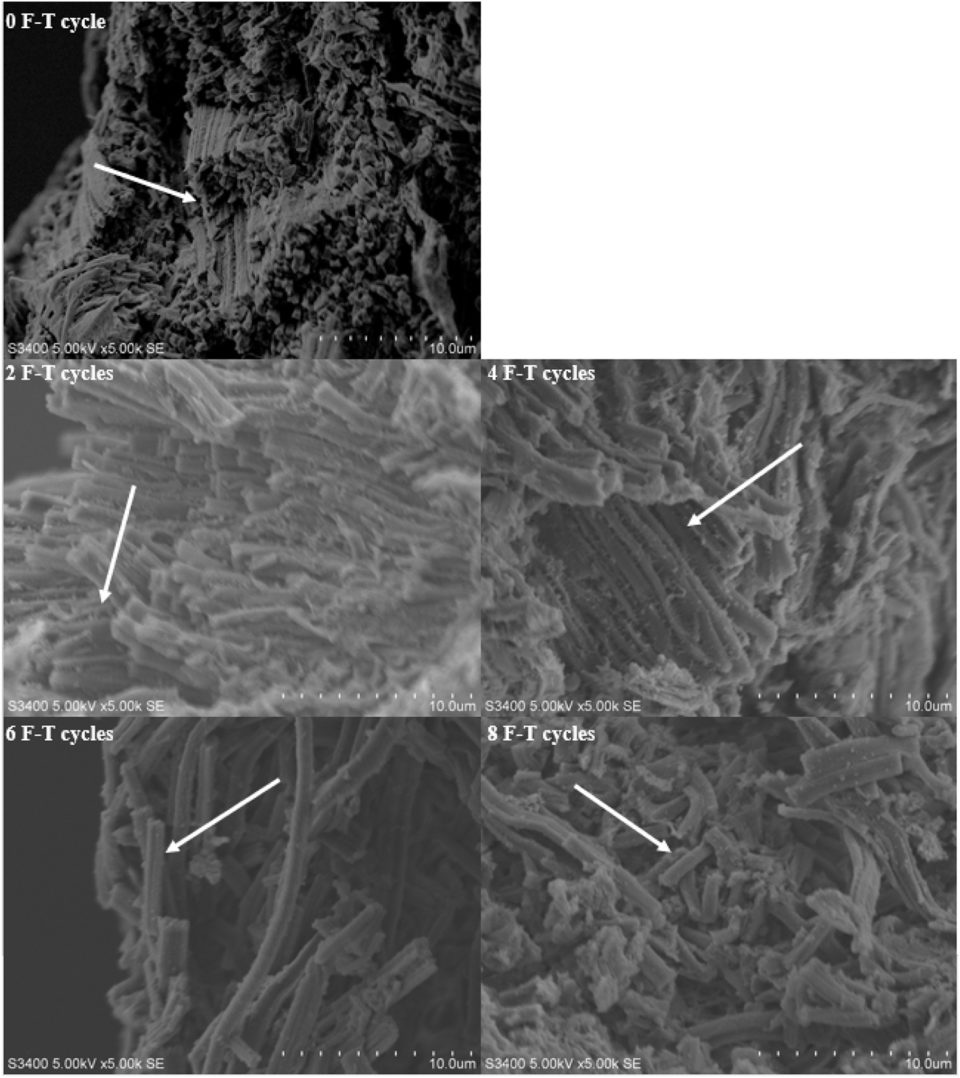 Frozen storage leads to protein oxidative denaturation. For the test of sodium dodecyl sulfate-polyacrylamide gel electrophoresis (SDS-PAGE), the decrease may be caused by the proteolysis (the breakdown of proteins into smaller polypeptides or amino acids), denaturation or oxidation of protein during F-T cycles. At the same time, the release of some enzymes may facilitate the protein fragmentation, especially at the fourth F-T cycle, caused by the disruption of muscle cells during repeated F-T cycles. The results of SDS-PAGE indicated that protein fragmentation was accompanied by the aggregation of protein during repeated F-T cycles and the protein oxidative degradation was accelerated by increasing F-T cycles, especially after four  F-T cycles (Fig. 3). 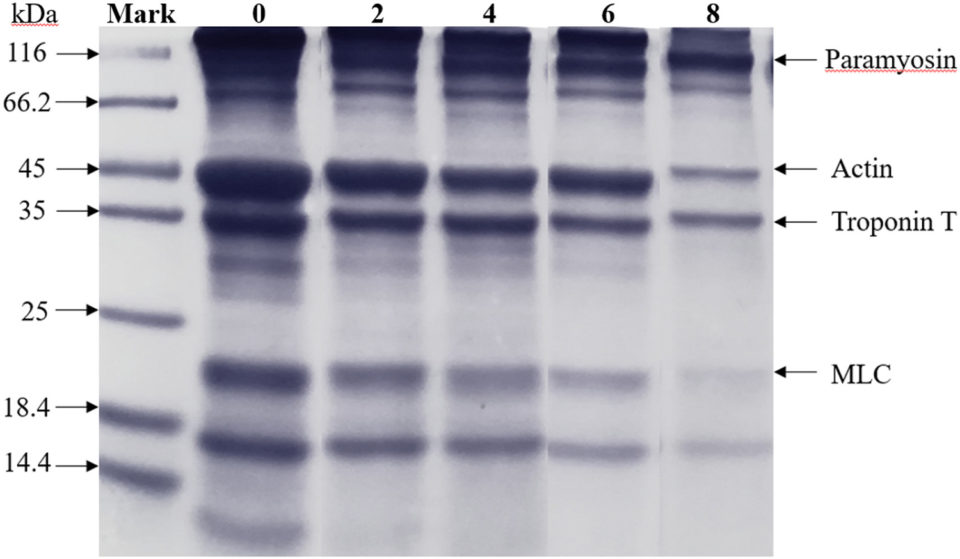 Fig. 3: SDS-PAGE patterns of muscle proteins in shrimp treated with different freeze-thaw cycles. 0, 2, 4, 6, 8  at the top of the picture represent the number of F-T cycles. The sample under 0  F-T cycle represented fresh shrimp.

Results showed that repeated F-T cycles could cause a clear a linear decrease in the hardness of shrimp samples and the softening of shrimp muscle during storage, which produced detrimental side effects in the textural properties of shrimp. This decrease in texture properties caused by the repeated formation of ice crystals was associated with the loss in the integrity of muscle fibers and the weakening structure of muscle, which implied lower resistance to shear force.

Compared to fresh shrimp samples, repeated F-T cycles were more likely to accelerate the destruction in muscle fiber integrity, the increase of drip loss and the deterioration of texture properties, especially in the first and second cycles.

The melanosis of shrimp is related to the role of polyphenol oxidase (PPO), an enzyme involved in the black spot formation in crustaceans during postmortem storage. The increase in the number of F-T cycles aggravated the release of PPO and the increase in PPO activity, especially after the second F-T cycle (Fig. 4). 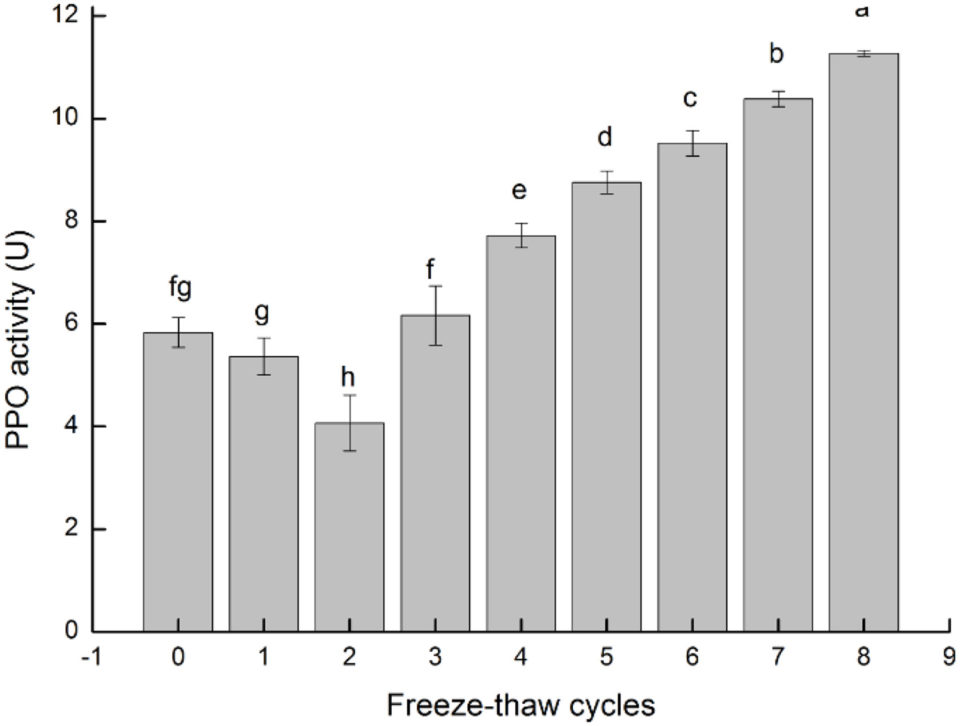 Regarding changes in total volatile basic nitrogen (TVB-N; an important index of freshness) value, microbiological analysis, and sensory evaluation, the TVB-N value of 20  mg  N/100 grams protein in shrimp generally represented the threshold of freshness and below 30  mg  N/100 grams protein was considered acceptable. TVB-N values were unacceptable following the sixth F-T cycle. These results revealed that F-T cycles could cause the oxidative degradation of protein, especially after four cycles. For seafood products, the threshold of freshness about TVC value is 5 lg CFU/g and a TVC value above 6 lg CFU/gram represents an unacceptable quality.

With the blackening, reddening, and putrification of samples during repeated F-T cycles, sensory characteristics such as color and odor deteriorated, which was reflected in the decrease in sensory scores. After three F-T cycles, the sensory scores of samples decreased significantly and were lower than 15 (acceptable threshold) after the sixth F-T cycle, which was consistent with the change in color difference and texture. Based on these indicators, the quality of shrimps treated with different F-T cycles started to deteriorate visibly at the third F-T cycle and became unacceptable at the sixth F-T cycle.

In addition, the reformation of ice crystals caused by repeated F-T cycles resulted in the deterioration of texture properties and color, which was closely related to the damage of muscle microstructure and PPO activity. 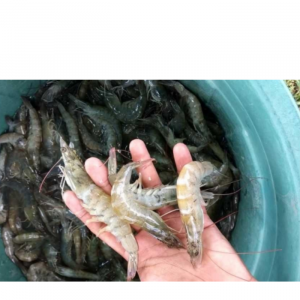 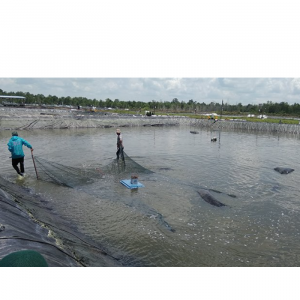 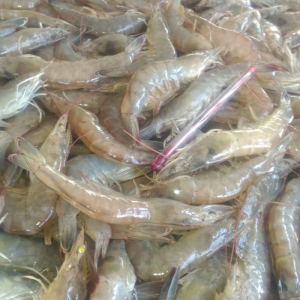