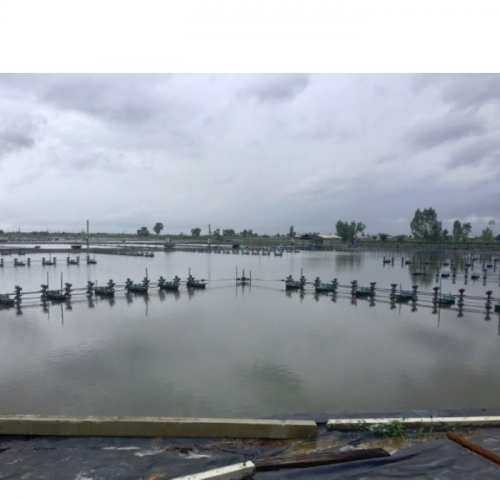 The prevalence of numerous diseases that affect the shrimp and prawn aquaculture industry has promoted the development of various health management strategies. Some include greater biosecurity and sourcing of specific pathogen free animals, and in more extreme cases, using chemicals and antibiotics.

However, because of the nature of open pond aquaculture, where most farmed shrimp is produced globally, it is often not possible to farm animals in a bubble by completely eliminating the presence of all pathogens.

In fact, in traditional pond systems, the continual build-up of sediments and subsequent deterioration of water quality are known to encourage the growth of many pathogens including pathogenic Vibrios. Promoting microalgae growth can help maintain water quality, but this can sometimes be hard to manage, and these systems are prone to pH and dissolved oxygen fluctuations that can stress the animals.

Biofloc technology was introduced to tackle some of these issues. This is accomplished by the addition of extra carbon to the water, leading to the conversion of potentially harmful organic matter and sludge into consumable biomass. Such a process can eliminate or significantly reduce the need for water exchanges, and is thus more environmentally friendly while also offering greater biosecurity.

Biofloc technology has been met with success around the world; however, the operating costs can be significantly higher to maintain bioflocs in constant suspension. A potentially more balanced approach between using both microalgae and biofloc in aquaculture is known as Aquamimicry. In this article, I present a simple description of the protocol and implications for its use to assist farmers considering this concept, which I believe will become a widespread standard practice in the industry.

Aquamimicry is a concept that strives to simulate natural estuarine conditions by creating zooplankton blooms (mainly copepods) as supplemental nutrition to the cultured shrimp and beneficial bacteria to maintain water quality. This is done by fermenting a carbon source, such as rice or wheat bran, with probiotics (like Bacillus sp.) and releasing their nutrients. This method is in some ways similar to biofloc technology, but there are some key differences.

Firstly, the amount of added carbon is reduced and not strictly reliant on ratios to nitrogen input. Secondly, rather than encouraging and suspending high amounts of bioflocs, sediments are removed in more intensive systems to be reused by other animals.

Ideally, the water mimics the appearance and composition of natural estuarine water that includes microalgae and zooplankton. When such a balance is met, pH and dissolved oxygen fluctuations are minimized, and there is no need for antibiotics or chemicals because the rice bran provides nutrition for the zooplankton and bacteria (as a prebiotic) to create “synbiotics,” which are dietary supplements or ingredients that synergistically combine pre- and probiotics. General layout of a farm in Thailand where the Aquamimicry concept has been adopted for intensively culturing shrimp. (A) grow-out pond with eight long-arm paddlewheels (3-hp at 85 rpm) arranged to promote water circulation around the pond for solids to concentrate in the center; (B) sump (13-m diameter and 2-m deep) is lined; (C) sedimentation pond (4-m deep in the center) containing milkfish or catfish, and with water overflowing to (E), biofilter pond containing tilapia. Plastic lining is arranged to slow the water velocity and increase the water retention time. When the water returns to the growout pond, there very low levels of nitrogenous waste.

The initial idea towards the development of this protocol occurred in Thailand during the disease outbreaks in the 1990s. At that time, it was noticed that in some extensive shrimp ponds the shrimp were growing well and disease-free, despite being in close proximity to infected ponds. No formulated aquafeeds were used, as the farmers had limited resources. Instead, only rice bran was used and it was thought to be a potential reason for the better performance in extensive ponds. Over time, and after extensive trial and errors, a protocol slowly developed.

When this concept was first introduced outside Thailand, many farmers decided to first try this concept in their worst performing ponds. This was sometimes seen as a last chance attempt before switching to fish farming or getting out of the aquaculture industry altogether. However, within the first batch, pond production costs were reduced by half, and the practice significantly expanded to more ponds. Currently, some form of this concept is being adopted in various countries including Vietnam, China, India, Ecuador, Korea and Egypt. As with any farm, there are some variations to the protocol depending on available resources and the farmer’s experience.

The success of this approach includes decreasing the feed conversion ratio, minimizing water exchanges and eliminating disease. A variety of factors are believed to contribute, such as a better overall nutrition of the animal, reducing stress associated with fluctuating water quality, and minimizing environmental conditions favorable to pathogens.

Using a filter bag (200-300 μm), the pond is filled up to a depth of 80-100 cm, probiotics (Bacillus sp.) added, and the pond is chain-dragged for seven days. If lined ponds are used, heavy ropes should be used instead to prevent tearing the liner. Gentle dragging is done to enhance soil mixing with the probiotics and to minimize the development of biofilms that could potentially be toxic to the shrimp.

To eliminate any small fish or eggs, teaseed cake (at 20 ppm) is applied along with fermented rice bran or wheat bran (without the husk) at 50-100 ppm. More additions result in more copepod blooms, which should happen within two weeks. In the meantime, full aeration is necessary for proper mixing, to reduce teaseed cake levels, and to mix the nutrients and probiotics in the pond.

Carbon source preparation and use

A complex carbon source, such as rice or wheat bran (without husk), is mixed with water (1:5-10 ratio) and probiotics under aeration for 24 hours. If the bran is finely powdered, the entire mixture is added slowly to the pond. If crumbled, the upper “milk” or “juice” is added to the pond and the bran solids are fed to fish in the biofilter pond. The pH of the incubation water should be between 6-7 and adjusted if necessary.

Once the shrimp are stocked, which can be at densities of 30-100 animals/square meter, the amount of fermented bran to be added is dependent on both the system and the turbidity level. As a general guideline, 1 ppm is recommended for extensive systems, while for intensive systems, 2-4 ppm is used. The ideal turbidity (using a Secchi disk) should be around 30-40 cm. If higher, less bran should be added and vice versa. Draining effluent from a central drain in the growout pond to a sedimentation pond two hours after feeding the shrimp.

During the growout period, additional probiotics should be added each month to help maintain water quality and to promote the formation of biocolloids (flocs composed of detritus, zooplankton, bacteria, etc.). Following 15 days after pond stocking with shrimp, slowly dragging chains or ropes on the pond bottom (but not over the central drain) is encouraged to minimize the formation of biofilms.

For extensive systems, there is generally no need for further water quality management or action.  For intensive systems, however, there is a need to remove excessive sediments (e.g., through a central drain) to a sedimentation pond two hours after each feeding. Regardless of the system type, the pH is reportedly stable throughout.

The sedimentation pond should be deeper (up to 4-m in the center and 2-m on the edges) than the growout pond to allow sediment accumulation. In it, bottom-dwelling fish species – such as catfish or milkfish, depending on the water salinity – should be stocked at low densities. Their feeding on and stirring up the detritus help clean the pond system, and the fish can provide food for farm workers.

The sediments from the growout pond encourages the production of worms and other benthic invertebrates that the fish can consume. Meanwhile, if ropes or lines are present, these are frequently and strongly colonized by horse mussels. Not only do these help by further filtering the pond water and removing suspended solids, but can later be crushed and fed to the shrimp during production.

Currently the ratio of these ponds is 1:1 (treatment to growout ponds), which obviously requires relatively large areas of land in relation to production. However, trials are currently underway to substantially reduce this ratio by adjusting water flows, carbon inputs and different combinations of live organisms in the treatment ponds.

After harvesting, the pond bottoms reportedly have no smell, black soil or accumulated sediments, and the pond is therefore often ready to be prepared for the next production cycle by the addition of fermented bran and probiotics, as mentioned earlier. Farmers have stated that the shrimp have a deeper red color when cooked, which could be from the consumption of additional pigments from the natural food produced in the pond.

Although there is no information available yet, the omega-3 fatty acid content of the shrimp would likely be enhanced and would provide additional health benefits. This is of particular relevance, as the aquaculture industry is increasingly relying on land-produced aquafeed ingredients that can lead to lower levels of omega-3 fatty acids in the final products.

Two major drawbacks to the Aquamimicry approach include the potential difficulty of applying this concept to indoor conditions, as well as the use of relatively large treatment ponds. Within indoor raceway systems in Korea, the adoption of this concept reportedly gave better results when compared to a biofloc-based system. However, it became necessary to discharge excessive sediments, which were not reused again.

To deal with the issue of large treatment ponds, currently there are efforts being made to reduce this ratio with the growout ponds, but on more extensive systems no treatment ponds are necessary. As with any new aquaculture technology, farmers interested in this new protocol should first perform trial runs to determine whether this can be successfully applied to their particular circumstances.

Because reportedly better-quality shrimp can be produced at lower cost and in a more sustainable manner, the concept of Aquamimicry is rapidly spreading throughout the world. Some interpretation of the concept will undoubtedly become a new standard in shrimp farming and benefit future generations in the industry. 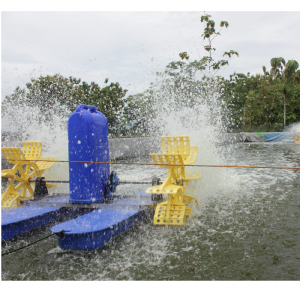 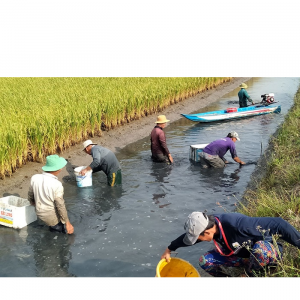 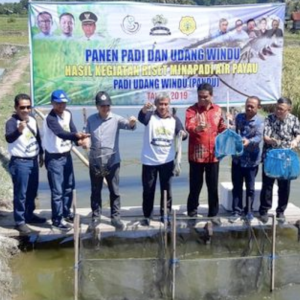